Following the Mississippi legislature’s recent passage of a religious freedom bill that opponents say could lead to state-sanctioned discrimination against gays, businesses statewide have responded by displaying a decal informing LGBT customers that their business is welcome. 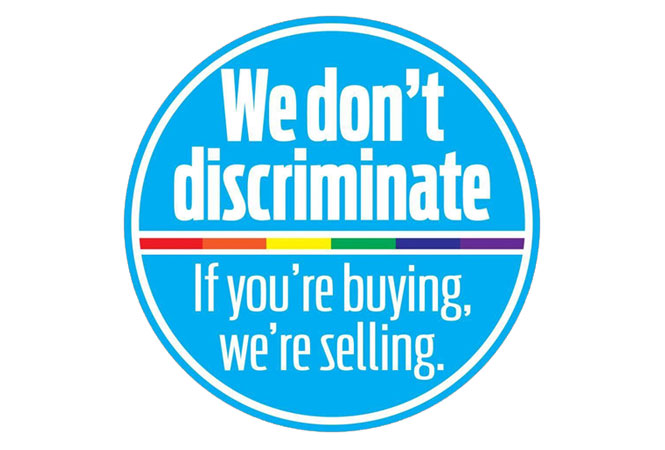 We have seen the future . . . and you’re gonna get screwed

‘As state courts across the nation prepare to referee numerous public pension reform disputes, a gaggle of interested parties — from major corporations to the Koch brothers — will next week sponsor an expenses-paid conference on public pension reform for judges who may decide the cases’ fates.’

One can easily imagine the seminar topics that attendees will be able to choose from:

Nothing gives me the creeps like the prospect of the Koch Bros. helping judges better understand public employee pension reform.

‘According to Cardinal Timothy Dolan, the current Archbishop of New York, women don’t need insurance coverage for birth control because they can purchase it at “any shop on the street,” including a gas station like 7-11.’

So the old fart thinks you can waltz into a gas station and buy birth control pills — without a prescription, yet. Clearly it’s been a long time since he last tried it.

As someone on Slashdot said, since the NSA intercepts and stores our e-mails forever, why not use it as a backup service? It just lacks the API to restore files, therefore this guy called the NSA to ask for a backup restoration. Guess what? It did not work.

After all, why should we have to pay twice for services already performed with tax dollars?

Police officials say a proposed medical registry of 20,000 students with disabilities would be “an administrative nightmare” and would require resources the NYPD doesn’t have.

Deputy Chief Jeremiah Quinlan, the commanding officer of the NYPD’s special investigations division, said “One serious problem with registries is that they’re generally outdated by the time they’re created.”

I call “bullshit!” The NYPD no doubt has registries of supposed terrorists, bicycle riders, foreigners, and who-knows-what else. But no time to find Avonte Oquendo.

Anti-Semitic activists have been pushing phony eviction notices under the the dorm room doors of Jewish undergrads at NYU. The notices included the following:

If you do not vacate the premise by midnight on 25 April, 2014, we reserve the right to destroy all remaining belongings.We cannot be held responsible for property or persons remaining inside the premises. Charges for demolition will be applied to your student accounts.

And here’s the tepid response of NYU mouthpiece John Beckman:

A flier titled ‘eviction notice’ anonymously slipped under doors at night is not an invitation to thoughtful, open discussion.

Thanks, John. I’m glad you cleared that up.

“Brown University punished a rapist with what amounted to a one-semester suspension for choking and sexually assaulting a fellow student. . . .

“Brown is one of numerous universities, including several Ivy League schools, under fire for lax policies dealing with sexual violence. . . .

“Harvard College was hit with a federal complaint last month for, among other grievances, forcing sexual assault victims to live in the same residence halls as their attackers.”

Don’t send your kids to college without proper self-defense training.

Brown University Will Allow Rapist Who Choked His Victim Back On Campus.

Basically, Amazon US pays its Luxemburg subsidiary inflated fees for the right to use its own software. The effect is to move large chunks of Amazon’s profit to countries where the tax rate is lower. The cool thing is that, apparently, both Microsoft and Google do the same thing.

As the world’s biggest retailer, Wal-Mart Stores Inc. pays billions of dollars a year in rent for its stores. Luckily for Wal-Mart, in about 25 states it has been paying most of that rent to itself — and then deducting that amount from its state taxes.

My question is: how do the rest of us get in on these scams?

Something Fishy Has Happened At Amazon Over The Last 2 Years.

Yes, the New York Times columnist is losing it. On Meet the Press, he actually said the following:

“Basically since Yalta we’ve had an assumption that borders are basically going to be borders, and once that comes into question, if in Ukraine or in Crimea or anywhere else, then all over the world … all bets are off. And let’s face it, Obama, whether deservedly or not, does have a — I’ll say it crudely — but a manhood problem in the Middle East. Is he tough enough to stand up to somebody like Assad or somebody like Putin? I think a lot of the rap is unfair, but certainly in the Middle East there is an assumption that he’s not tough enough.”

Our sympathies go out to his friends and family.

Regular reader of Biteme.me know in what high regard we hold Michael Bloomberg. Nevertheless, when he offers to put $50 million behind a project, we sit up and listen.

Well, that’s what he’s promised to do with his gun control crusade.

Bloomberg said that gun control advocates need to learn from the N.R.A. and punish those politicians who fail to support their agenda — even Democrats whose positions otherwise align with his own.

Bloomberg’s blueprint reimagines the way gun control advocates have traditionally confronted the issue. Rather than relying so heavily on television ad campaigns, Mr. Bloomberg will put a large portion of his resources into the often-unseen field operations that have been effective for groups like the N.R.A. in driving single-issue, like-minded voters to the polls.

But all is not sweetness and light: Democratic leaders argue that Bloomberg threatens to hand control of the Senate to Republicans, which they say would doom any hope of passing gun control legislation.

via Bloomberg Plans a $50 Million Challenge to the N.R.A. – NYTimes.com.