“Even by the lamentable standards of U.S. banking and securities regulators, the settlements unveiled this week with Toronto-Dominion Bank (TD) for its role in a $1.2 billion Florida Ponzi scheme were incredibly lacking. . . .

“The penalties amounted to $52.5 million: $37.5 million to settle allegations by the Office of the Comptroller of the Currency and $15 million to the Securities and Exchange Commission. Per the usual niceties, TD Bank neither admitted nor denied the agencies’ claims, which ranged from negligence to violations of anti-money-laundering laws. . . .

“The total fines are less than the $67 million that a single victim of the Ponzi scheme was awarded at a jury trial against TD Bank last year . . .”

Help a Ponzi Scheme? It’s No Big Deal for a Bank – Bloomberg.

“Virtually everything that Modesto Junior College could do wrong, it did do wrong. It sent police to enforce an unconstitutional rule, said that students could not freely distribute literature, placed a waiting period on free speech, produced an artificial scarcity of room for free speech with a tiny ‘free speech area,’ and limited the number of speakers on campus to two at a time. This was outrageous from start to finish. Every single person at Modesto responsible for enforcing this policy should have known better.”

‘Parents of the hundreds of teens who broke into and destroyed former NFLer Brian Holloway’s upstate vacation home are threatening to sue him for outing their brats on Twitter — saying he’s spoiling their chances of getting into college.

‘ “You would not believe the calls that have come in, threatening to firebomb me or hurt or sue me — any manner of things,” the stunned Holloway told The Post Thursday as he toiled away cleaning up the damage at his 200-acre spread in Rensselaer County.’

The famous NY Post headline is now available as a tee shirt! 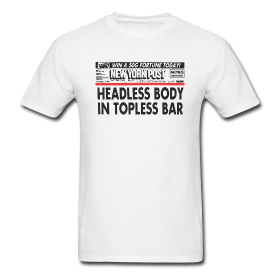 Google, Nissan, Ford, GM, Toyota and others are all working on driverless vehicles. And the author of this article is all enthusiastic about how much money will be saved by getting rid of chauffeurs, truck drivers and the like. But not a thought of how we’re going to find new jobs for all the people who will be put out of work.

It’s a classic case of externality. Google will make a gazillion dollars, but the side effects won’t be their problem — they’ll be OUR problem.

The headline writers are going apeshit over a recent Bloomberg interview in New York Magazine. But I’ve read the interview and it hardly supports the hysterical headlines:

There’s more than enough stupid things Bloomie has done without resorting to making stuff up.

I cannot even begin to keep up with all the news about the invasion of our privacy — by the government, by vendors such as Google, and by hackers — but sometimes I get gobsmacked and must make a post . . .

The National Security Agency is winning its long-running secret war on encryption, using supercomputers, technical trickery, court orders and behind-the-scenes persuasion to undermine the major tools protecting the privacy of everyday communications in the Internet age, according to newly disclosed documents.

Two people died at the recently-shuttered Electric Zoo rave festival on Randall’s Island, but NYC Mayor Bloomberg isn’t concerned. “We’ve been working with this promoter for the last five years and they have a stellar record,’’ Mayor Bloomberg told reporters yesterday. “They . . . put in as good of procedures as we could think of and have been nothing but cooperative, and I have nothing but good things to say.”