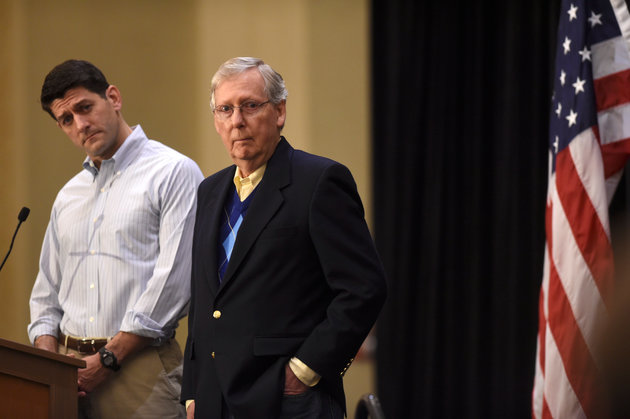 Last year, it was all they would talk about.

If Congress is broken, as some critics and lawmakers believe, a major problem is that lawmakers no longer pass regular appropriations bills.

Instead, Republicans and Democrats fiddle around with a few spending bills until the process breaks down enough so that they can wash their hands of it and give up on putting controversial measures on the floor. This way, they can duck tough votes on issues like abortion and eventually negotiate a year-end deal that essentially continues current funding for everything. 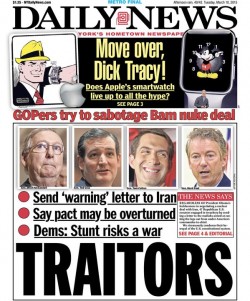 When he heard that forty seven Republican Senators had sent a letter telling the Iranian leadership that President Obama’s negotiations could not be relied on, your Bitemaster went apoplectic.

He saw this as another Republican attempt to undermine the President they had sworn to defeat. It was, the Bitemaster thought, an act of treason, though he could not bring himself to say so in public.

Now the Daily News has done it for him, calling the Republican Senators “traitors” for their attempt to usurp the constitutionally-mandated foreign policy authority of the President.

Seeing the headline was a satisfying moment for the Bitemaster. At least until he read this in the Washington Post:

Administration officials insisted that the president doesn’t need congressional approval to make a deal with Iran and that Congress wouldn’t be able to alter the terms of a deal.

Just a moment. If the President were trying to unilaterally make a treaty, shouldn’t the Senate push back?

On the other hand, Iranian Foreign Minister, Dr. Javad Zarif, responded that “in our view, this letter has no legal value and is mostly a propaganda ploy.”

Your Bitemaster is usually skeptical about claims that Congress is in the pocket of big-money interests. But reporter Ryan Grim has laid out the opposite argument: since there are no deep-pocketed lobbyists looking to lavish campaign cash on members of the Veterans Affairs committees, the committees have become the dumping ground for the youngest and least-effective members of Congress.

All kinds of self-dealing is permitted by lax Congressional ethics rules (which are set by the Congressmembers themselves), permitting them to send millions to groups connected to their relatives.

Craig Holman of Public Citizen, a nonprofit government watchdog group, says “The executive branch can’t steer contracts or work to businesses where family members work. They can’t even own stock in industries that they oversee, unlike Congress. It’s complete hypocrisy.”