‘A culture of “teaching to the test” fostered by the No Child Left Behind law may be creating a generation of law students who lack skills for critical thinking and good writing, according to University of Minnesota law professor Michele Goodwin.’

‘Most new graduates lack even the basic skills needed for the workplace, complain major employers. More than two-thirds of bosses said they cannot handle customers while half said they cannot operate independently. Half of companies said university leavers struggle with basic English and nearly two-fifths claim they  cannot do simple maths. [British usage]

But the problem is not  limited to today’s students, it also afflicts lawyers in practice for many years. Bryan Garner writes . . .

‘For many years in lectures, I’ve likened practicing lawyers, when it comes to writing, to 23-handicap golfers who believe that they’re equal to the touring professionals. For those not golfers, this would mean that pretty poor golfers—those who habitually shoot in the mid-90s but benefit from the big handicap—somehow fool themselves into believing that they really are shooting in the mid-60s, and that they’re about as good as it gets. I’ve been trying, in other words, to say that lawyers on the whole don’t write well and have no clue that they don’t write well.’

But the problem goes back further than that. Your esteemed Bitemaster edited a newsletter many years ago, whose writers were all baby boomers, and many of them couldn’t write worth a damn. If you do the math, you’ll find that today’s law school deans are often a full generation younger than those boomers.

And back in 1955, Rudolf Flesch published Why Johnny Can’t Read, an indictment of the methods used to teach reading in American schools. The kids who Flesch thought couldn’t read were probably born in the early 1940s.

When discussing this post with my colleague, Dr. H. O. Hell, he related a story told by George Orwell. Orwell said that he had gone to a prestigious English boarding school (presumably Eton) where they “taught to the test” so that the students would get into Oxford and go on to successful careers.

So what’s my point? That everybody complains about education — apparently in every generation — but that few of them have any statistics to measure how we’re doing.

And if you want a laugh, look at the first subhead of this article: 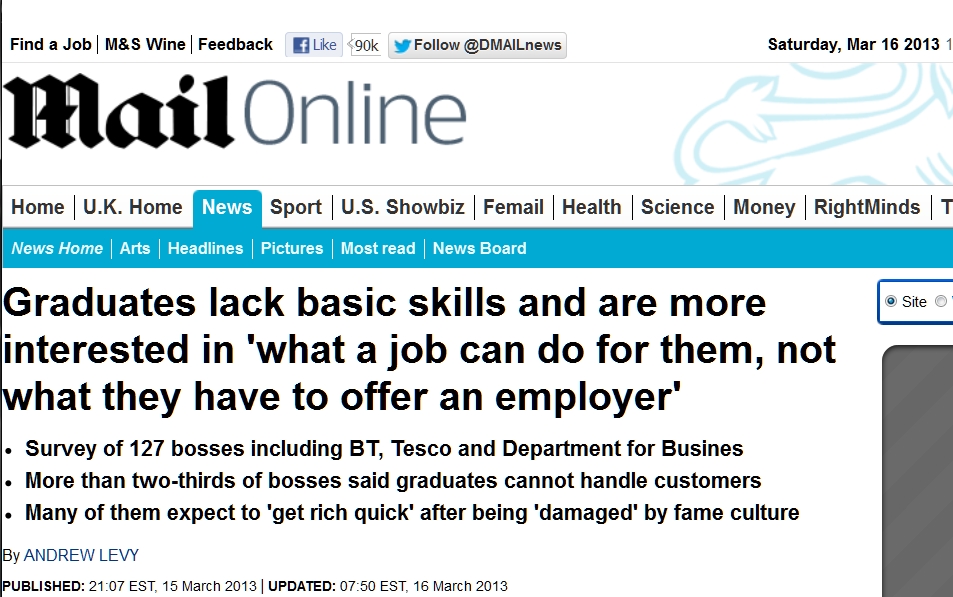